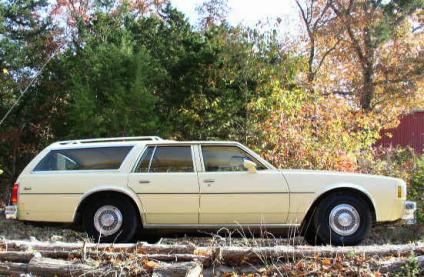 It looked like this but ours was GREEN….even better, right?

I was born in the late 70’s and being an 80’s -90’s kid I grew up in a station wagon. I am sure many of you can relate from my generation. I remember when I was really young my Mom had one that had the wood paneling around the middle of it, in fact I am pretty much convinced the entire damn thing was made of wood. At any rate, my mother ended up having a wreck and totaled that car. In my mind, the car was gone…it was the end of an era, something I was gladly to say goodbye too. However, never fear Daddy’s here with another one ten times worse than the first one. This “new” station wagon was HIDEOUS. I absolutely despised it. I have no earthly idea where my father found this car. Wait, I take that back. I don’t know who at Chevy said “Stop! put the pencil down my friends, no need to sketch any further, that right there IS the face of the NEW Station wagon” Surely, the people that approved this enormous road boat heard the words “you are fired” shortly there after. This station wagon was lime green. Yes, folks you read that correctly…LIME GREEN. When I say road boat, I mean it. This thing was huge. The front seat was as wide and long as a church pew. 13 or 14 people could sit in the front and be completely comfortable. I am convinced you could hold a concert in the front seat and comfort wouldn’t have been a complaint. The back seat of this car was a good football field length away from the front seat. This was not the car where your mother could reach back with her arm to the back seat and grab  “a holt” of ya. Remember that threat? “You better be nice to your sister! You don’t want me to reach back there!” Yeah, I don’t ever remember that threat because no way in hell could you have reached anything in the back seat from the front of this vehicle. I guess this was really the ultimate family car back in my day. My parents could throw me and Anne and half our first grade class in the way way back, we could play My Little Ponies all the way to town while my Mom and Dad listened to Willie and Waylon and solved all the worlds problems. I was tossed around so much in that way back seat that I should have probably wore a helmet. Later in life as I got older, that car became my nemesis. The thought of my mom picking me up at school in the green machine would be UTTER embarrassment, something this little cheerleader could barely mentally handle. It would so have it that a flood would carry that car away down a creek years later. I was so excited. Until my mother hired someone to drag it out of the creek bed with a bulldozer. Here it came like the Loch Ness Monster to haunt me. Of course wouldn’t you know that stupid car started right up! What are the chances?? That green station wagon’s only purpose in life was to haunt me and of course to NEVER DIE. I left home and went to college and moved to Lex years later. I got a house with some friends and guess what was sitting in the driveway next door. No seriously, I can’t make this up. That damn green station wagon. I laughed and laughed when I called my mom. I look back on that big wagon and think fondly of it now. It was a great car and it served it’s purpose, which was to embarrass me as I grew up and became an adult. It is funny how things turn out, my little nemesis growing up, became a treasured memory. Pretty cool!

About The Southern Twins